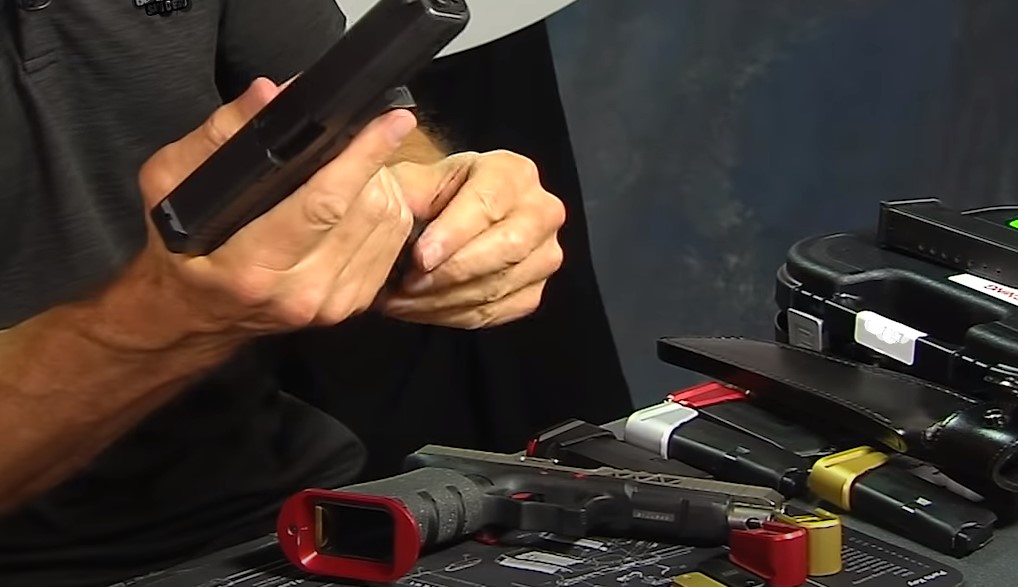 Extended magazines are typically used in compact pistols to push the limits of spring retention and the number of rounds a person can fire without having to switch magazines.

It’s not uncommon for people to ask if carrying a larger magazine is even a good idea. They’re either loved or hated by people. You can decide if they work for you after we examine their pros and cons in this article.

The topic of using magazine extensions for carrying magazines has been discussed around the web a bit, but it is definitely one that requires a more comprehensive look.

I guess I was looking in the wrong place, or too many people get the wrong idea.  Anyhow, there’s no point in wasting time. Let’s get started!

The prices of concealed carry magazines with extended capacity are usually similar to the prices for standard magazines.

Because of this, there’s no real need to worry about spending a lot of money. For concealed carry, I always recommend comparing extended magazines with standard ones.

Using an extended mag should not pose a problem if you don’t mind being seen or having prints on your clothing. Just switch back to standard if it appears to be an issue – such as being spotted or prints appearing on your clothing.

There is no prohibition against keeping an extended magazine as a backup. There are always good opportunities to take advantage of. You know, in case you need to use it for self-defense, you’ve got those extra rounds at your disposal.

Concealed Carry: Is It Worth The Hassle To Have An Extended Magazine?

If you are carrying concealed, it is certainly worthwhile to pick up another magazine to get an extra round or two. If the worst happens, you can use it as a backup for your flush standard fit magazine.

The upsides far outweigh any downsides. Definitely keep a backup 8-10 round magazine in your glove box if you normally only have a pistol with 6-7 rounds. Keep your 30-round extended magazines in your truck gun or glove box.

Spare magazines can disrupt concealment and make the day uncomfortable, depending on how you carry them. Carrying an extended magazine on your belt is usually where the added length and bulk are most noticeable.

In summer, with a belt, a baseplate extension can be difficult to carry when it’s warm outside. I carry standard-sized spare magazines on my belt holster when I carry an extra.

While wearing it on your beltline, it feels much bigger than it is. Using a pocket clip system, like the NeoMag system, is probably the easiest way to carry a spare magazine.

Mags are held in place by a magnet, so you won’t have to carry them on your belt. It is good to know NeoMag has both a standard mag carrier and a long mag carrier.

These extendable mag carriers have an extended pocket clip that makes it easier to conceal the magazine and accommodate the extended baseplate.

For concealed carry, magazine extensions offer a number of advantages.

In an extension, we are referring to a single round that you can carry with you in concealed carry. The number of rounds can even be increased to three.  Just a little extra, no big magazines.  It is often argued that adding just one round or even a few rounds won’t make a meaningful difference to the size.

Numerous studies performed by law enforcement and the military have established a conclusive fact: Ammunition in a gun equals time in the fight.

As a result, the team with the last man standing wins.  It may sound simplistic, but every military encounter throughout history has followed this rule.

It was as much because of the extra round as it was for the larger bullet that the Army switched from the Colt New Army revolver series to 1911.  In those days, they understood the importance of every round in a fight.

However, let’s assume that you ignore it.

Another advantage of having a longer magazine is that it is more comprehensive. Paul Gomez, a shooting guru, spoke extensively about weapon contact.

Inherently, rifles are better than pistols pusher because they give us more control.  More points of contact are created by having both arms and shoulders touching the firearm.

This is the skin of the gun, in my view.  You will be able to control the gun more if you have more skin touching it.  Pinky additions are good, but the added palm contact seals the deal. Everybody shoots better when they make more contact.

Here are some of the cons of magazine extensions for concealed carry.

Is there a downside? Certainly, the size is a drawback.

The majority of us would carry a pistol capable of holding a full box of ammo. It’s impossible for us to do so.  This isn’t feasible at all.  What is the point of having a compact pistol if it is so big as a mid-sized pistol?

One of the main factors that make a gun print is the size of the magazine.  The grip of the Glock 43 matches that of a Glock 19, so why bother carrying it? Nothing justifies this.

Think about those additional rounds versus concealability in relation to their overall advantage.Most sub-compact firearms can handle a few extra rounds before becoming problematic.

When the rounds are not applied evenly, magazine extensions can occasionally result in feeding issues. The last two rounds won’t feed through a mag extension that’s too weak.

Even worse is when the spring jams the second round. Test out your magazine extension with many rounds before you purchase one.

It is important to be flexible and capable of making changes over time, as there are always different concealed carry loadouts that might be applicable.

The moment you’re in the right place or situation, it makes a lot of sense to carry an extended magazine. And that’s all there is to know about magazine extensions for concealed carry.