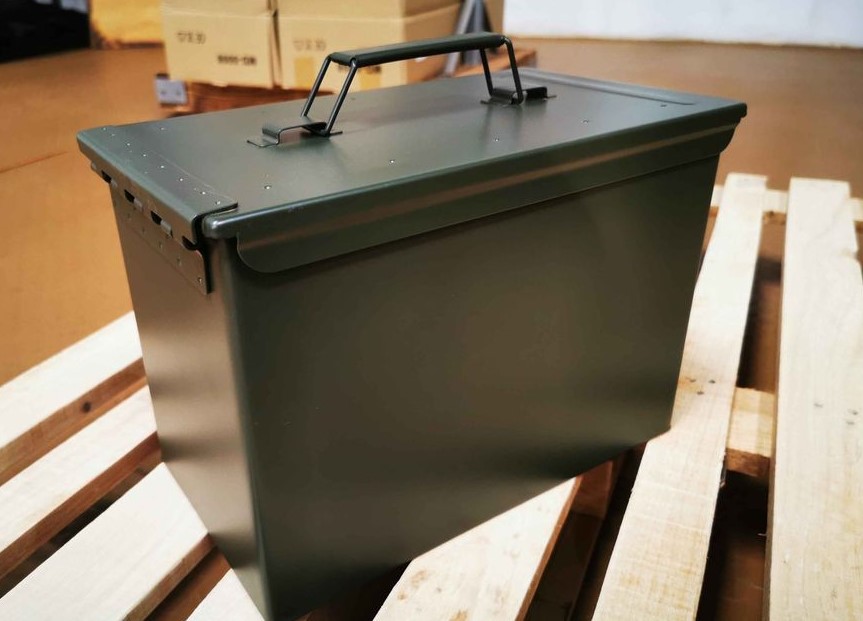 It’s never a bad idea to keep some hunting rounds on hand, stockpile hard-to-find ammunition, or just be prepared in case of an emergency. You know, things like the end of the world or a zombie apocalypse. It will be possible to store your ammunition for many years as long as you follow the correct storage practices.

When stored properly, ammunition can last for years and even several decades. It is important to keep your rounds properly stored for a number of obvious reasons. These guidelines will help you store your ammunition properly to be ready to use whenever you need it.

Keeping the storage environment low-humid is important. It is not necessary to aim for a particular level, but the lower, the better. It’s not a good idea to store ammo in a damp basement that’s occasionally prone to mildew.

Corrosion of brass casings and possibly even bullets are two of the biggest problems caused by humidity. High humidity or direct contact with household solvents such as oil, paint thinner, or ammonia can cause moisture to seep into ammunition.

During the production of premium ammunition, manufacturers make sure the cartridges are sealed at two of the most obvious seams- at the primer and around the bullet.

Primer and crimp are also sealed in premium waterfowl loads. You should still avoid high humidity, water, and chemical exposure.

Consequently, you may need to keep your ammunition stored in a sealed, plastic container off the ground. In the spring and summer, I also keep a dehumidifier near my ammunition. As far as effectiveness and durability go, I can attest to the reliability of General Electric’s products.

Manufacturers design modern factory-loaded rounds to operate reliably in arctic and tropical conditions alike. Therefore, you can expect your ammunition to last ten years as long as you protect it from extreme heat, humidity, and temperature fluctuations.

The ammunition you store at room temperature with low humidity can function reliably for decades, provided that it is stored at normal room temperatures. Ammunition is less susceptible to corrosion on a hot day than on a cold day.

About 150 degrees Fahrenheit is the temperature at which the breakdown begins. In a trunk of a vehicle, stored ammunition is subject to those extreme temperatures.

On a hot, sunny day, it’s definitely not a good idea to store ammunition in your car- that’s probably the biggest concern for the average shooter.

As a result of extremely high temperatures, ammunition components degrade rapidly. Although the bullet and case are relatively inert, the gunpowder and primer mixture can be affected by temperature and weather conditions.

It is possible that extreme cold could affect ammunition in the future, but it is not worth your concern. It is primarily important to avoid high temperatures because they destroy otherwise good ammo.

Nevertheless, rapid fluctuations can be detrimental over time as well. You may want to reconsider storing shells in your garage if you’re among the thousands of Americans who do so.

Store In A Dark Area

Sunlight is generally regarded as harmful to the skin. There’s probably someone you know whose weird aunt has become a walking leather wallet because she sat on the beach too long. In the same way that UV Rays can damage your skin and car’s paint job, they can also damage your ammunition.

When you store ammo in a dark place such as a closet or safe, the effects of UV light are greatly reduced. Additionally, the container you use to store your ammunition is important.

The use of solid materials instead of clear plastic can reduce exposure to damaging light. For this purpose, a 50 caliber or 30 caliber ammo cans or a surplus military can will work fine.

Ammunition For The End Of The World

The above precautions are enough for the majority of shooters. It is possible to further inhibit corrosion when your ammunition is kept in a potentially humid environment- perhaps at your cabin on the lake- for a long period of time.

There are also many types of Russian-made surplus “Spam Cans.” Both air and water are sealed tightly against the steel cans, making opening them difficult, requiring a special tool. Some shooters have long used ammo cans to keep ammunition fresh.

The cans typically contain 7.62×39 or 7.62x54R rounds, usually 640 in a box. Is it all right to use storage containers that aren’t airtight, such as those found at US military surplus stores?

Rubber O-rings are usually found around the rims of these devices to prevent moisture and gas from entering. WD-40 or gun oil can be applied very lightly to enhance the strength of this seal.

Put It In A Gun Safe

Consider getting a gun safe so you can store your ammo, gadgets, and other items on the shelves if you don’t already have one.  This prevents the ammo from being accessed by children or pets and protecting it from the weather.

With a good gun safe, moisture will not accumulate (although you may want to tuck in a couple of desiccant packets just to be sure), and your ammunition will be protected from extreme temperature fluctuations.  For safety’s sake, get a fireproof one.

Buying ammunition is not something I do on a daily basis.  Rather than view it as an investment, I think of it as an asset that will pay off whenever I want to get a few rounds going on the range, stock the freezer with meat from a hunt, or need force to defend myself.

As with financial investments, there are ways to ensure the safety and security of your ballistic investments.

As with rifles, shotguns, and pistols, munitions need the same amount of love and care.  Ammunition can’t just be bought, left forgotten in your attic or basement for years, and expect to function correctly still.

It isn’t rocket science to prolong the life of your ammunition.  So long as it’s kept cool and dry, you shouldn’t have any problems. And that is how you can store ammo for the end of the world.

I would highly recommend you invest in a good gun safe that can keep your valuables safe, whether it be from the environment or theft.