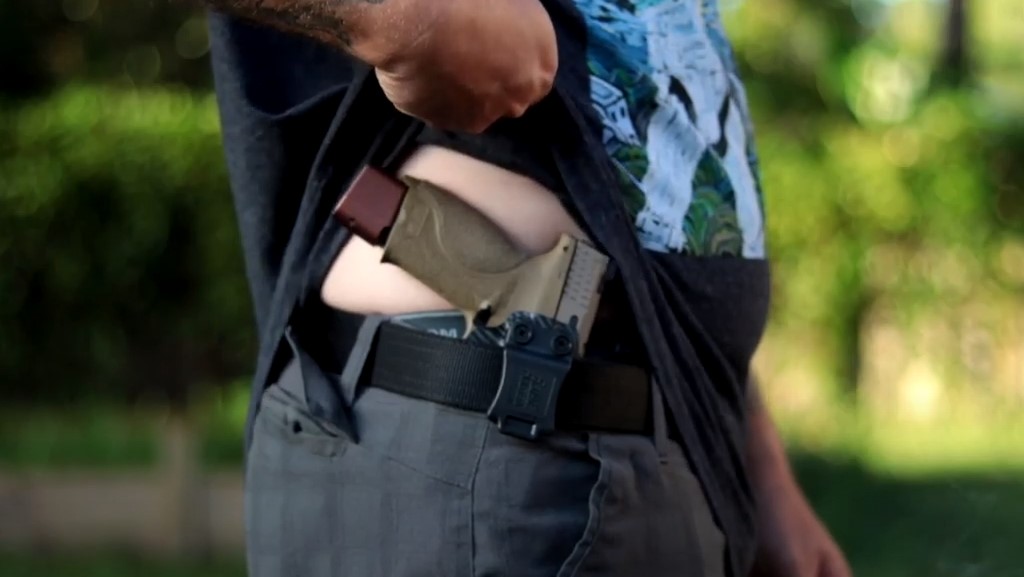 A full-size pistol is a great carry weapon to have since it can save your life in an emergency. There are times when carrying a pocket pistol isn’t enough.

Choose your handgun based on what you can shoot the best, whether it is a pistol or a revolver. When you talk about concealed carry with anyone, the first question you will be asked is what size pistol you should carry.

I can understand your desire to carry something large. When you take off that 1911 from your nightstand, you want to feel its weight and hear it clunk against your nightstand.

For most people, it is simply not affordable to buy a second pistol to carry concealed. Almost all concealed carry permit holders face the same situation. Many people only have enough money for a single handgun.

There was only one bottom line. The primary weapon you carried was usually a full-size pistol or revolver, so you had to find a way to comfortably conceal it.

Generally, when people think about “big guns,” they think about 1911s or long-barrel revolvers.

Unless you’re the villain of the Batman movie, you probably aren’t going to carry a full-size Desert Eagle or Smith & Wesson 500 Magnum with the 6.5-inch barrel.

A Glock 17, an H&K VP9, a Kimber Stainless II 1911, or something similar might be a better choice. The guns are all full-size weapons, none of which are small, regardless of whether some of these have shorter barrels than others.

Here’s Why You Shouldn’t Buy A Small Pistol

A smaller pistol is a compromise from a purely practical standpoint. Even today, self-defense pistols with 4-inch or longer barrels are the most effective. Physics is not changed by the desire to be comfortable.

The subcompact 9mm had a lot of malfunctions. The majority of them had issues, but some didn’t. As with all small automatics, this one has a small sight circle, and small automatics tend to be less stable. There’s nothing wrong with the gun-it’s simply a matter of physics.

For your comfort, what would you be willing to sacrifice? The same applies to anyone who carries a concealed weapon. Is it more important to carry what’s comfortable or what’s going to win you the fight?

In order to achieve balance, what would you be willing to compromise? Despite the fact that compromises may seem necessary, you may not have to make any.

How To Conceal Carry A Full-Size Gun?

You face different challenges when you carry a bigger gun than you do with a subcompact or compact handgun.

Here is an article that will help you know what to consider when contemplating or having difficulty carrying a big gun.

Get The Right Holster For Conceal Carry

Which is the best way to carry such a large pistol? Accessories make all the difference. Holsters are the most important. Other than the pistol, this purchase may prove to be the most crucial.

The thought of someone spending hundreds of dollars on a pistol only to get the cheapest possible holster always makes me cringe. When a pistol is carried in a poorly designed holster, it is uncomfortable, dangerous, and possibly even lethal.

A lot of comfortable holster manufacturers produce holsters that will support the weight of your full-sized pistol while still allowing you to comfortably carry it all day.

In a quality holster, a full-sized firearm can be comfortably carried, especially if the right belt is worn. The day you slide a full-sized pistol into a great holster and put it on a belt from a big box store will bring about a disaster.

Get a belt made specifically for holding pistols. It shouldn’t matter what size the pistol is. There are plenty of pistol belt manufacturers out there.

Black Hawk and Galco make pistol belts that look just like any other belly belt and match the craftsmanship of the biggest fashion names. Several others are available, and they all have the purpose of carrying a pistol comfortably and without looking like a pistol belt.

Carry Positions For A Large CCW

Having so much information at your disposal, let’s now take a look at carrying your big CCW.  Body type greatly influences your carry position. People who are 5’11” and 180 pounds have fewer options than people who are 6’5″ and 280 pounds.

In addition to how and where you carry a big CCW gun, your clothing choices will also play a role. What do you wear most of the time? Do you have a jacket and dress pants on?

In the summer, it is easier to conceal a smaller frame pistol in thinner, lighter, tighter-fitting clothing. Further, you won’t want to carry a full-sized gun in a holster on your ankle or in your vest.

I doubt it will even fit, so it isn’t going to be comfortable. You won’t be comfortable in it, and it’s probably not even going to fit. Now that we’ve examined all of your options, let’s move on.

Jackets can be worn for various occasions.  An OWB holster could be worn anywhere between 3 and 6 o’clock. Even full-size guns can easily be stowed in holsters on most jackets.

It is also helpful to wear loose-fitting clothing beneath your IWB holster or IWB 26, even if you can comfortably carry your sidearm of choice.

If you are wearing a jacket, you might consider wearing a shoulder holster instead of a waistband holster. Holsters like these aren’t for everyone, however.  It might be necessary to place the holster vertically on a thinner build in order to hide the weapon.

There are always going to be some compromises in life. Concealing a weapon is no different from carrying one openly. For many people, keeping up with fashion is more important than carrying a pistol.

Some people find it easier to conceal than others, as it is easier to conceal with less effort. A bit of compromise to fashion or ease is not an issue for those who are about bringing the best gun to the fight.

Even though every handgun manufacturer is promoting smaller and smaller pistols for concealed carry, the full-sized pistol is still a viable option. To save a lot later, you just need a little thought, effort, and to understand that it may take a bit of investment upfront.

Carrying a full-size pistol is, in fact, one of the best decisions you can make considering your carry weapon is a lifesaving tool. You now know all you need to know about concealed weapon carry.